Little is known of Headley in very early times as few dateable artefacts have been recovered in the village but because of finds in nearby villages to the East, Stone Age man probably passed through the area using the high ground in preference to the river valleys and the clay of the weald to the south. It is thought that the hunter-gatherers of the Stone Age moved into small settlements and began primitive farming during the period known as the Bronze Age. The coming of the Iron Age would have meant that a more settled life would be led by the inhabitants with farming becoming more established and important to the local economy.

The Romans certainly would have had a considerable influence in the area with the Roman Stane Street a few hundred meters from part of the Western and Northern boundaries of the Parish and a considerable Roman presence in the neighbouring village of Walton on the Hill with its well documented Villa and other finds. A few Roman finds have occurred during construction work etc. particularly in the North-western end of the village near Stane Street.

Little is known of the village during the early Saxon times, but at the end of the Saxon era as Christianity became established, parishes were formed and these parishes were grouped together in administrative areas called Hundreds. Headley was part of the Copthorne Hundred. There is no known record of a church in Headley at this period as the first records of a church are after the Norman Conquest however this church could have been build on or adjacent to a Saxon church.

In the Domesday Survey of 1066 the Manor of Headley was held by Ralph de Felgeres. The survey also records that the manor was held before the conquest by Countess Goda (the mother of King Harold) and it had been granted to her by King Edward the Confessor.

During the Middle Ages the ownership of the manor changed many times as families built up land holdings in this area to farm and supply produce to the growing city of London. What crops were grown was very much under the control of the Lord of the Manor and the Manor Court as were farms throughout England at that time.

During the 18th century the village became more established with the manor changing hands several times from the death of Sigismond Stydolf in 1710 who passed the estate on to his wife Margaret who remarried and the estate passed on to Charles Edwin who sold it to Henry Bolton in 1784. Bolton sold the house to Alexander Hume who assumed the name of Evelyn. Alexander Evelyn then sold the house on to Robert Ladbroke who in turn repurchased the land back from Henry Bolton in 1804. He later sold the land again to the Howard family of Ashtead Park. A second estate in the village was formed around a house known as Tiewood which was situated where Headley Grove is today. Several large farms seem to have dominated agriculture in the village including Manor Farm, Headley Court Farm, Slough Farm, Hyde Farm and Heath Farm.

Headley Church is first recorded in 1270 but this could have been a much earlier Norman or even Saxon building although the Domesday survey does not record a church in the village. The church remained much the same until the middle of the 19th century when WT Cracklow and Petri recorded it on engravings. Soon afterwards it was decided the old church should be replaced with a new structure in the 1850’s during the time that Ferdinand Faithfull was rector. The new church was consecrated in 1860 with the stones from the old church being used in the tower of the new church and a grotto in the churchyard a memorial to the rector Ferdinand Faithfull and his family including his daughter Emily who became Printer in Ordinary to Queen Victoria. 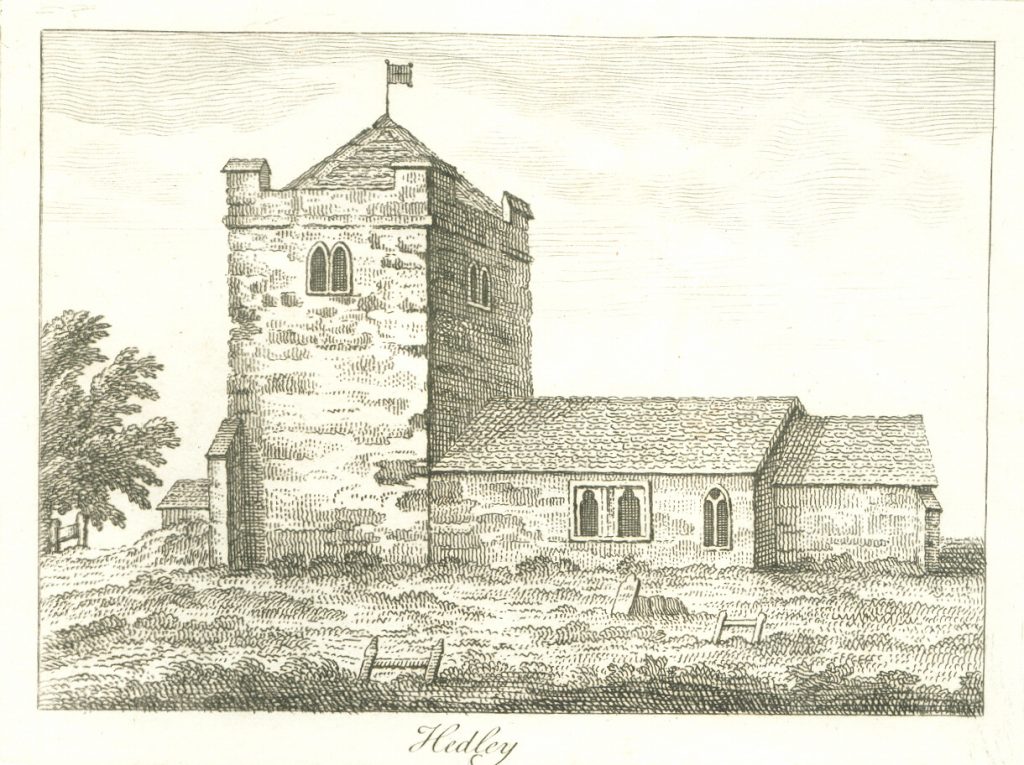 In the middle of the 19th century a number of schools were working in Headley serving various classes of people from the school for young gentlemen run by Ferdinand Faithfull at the Rectory, through a boarding school for young ladies near Headley Park to several “Dame” schools for the younger children. Older boys then went to Ashtead and the girls were taught in the village at Mrs Ladbrokes School. In the 1860’s the village school was built and all of the young village children attended this school next to the church until it closed in 1970.

Water for domestic use came from several sources until mains water was laid on in 1897. Many houses had wells or storage tanks, some of the wells such as the one at the Rectory being very deep to reach the aquifer. There was a spring at Oyster Hill and a tank on Headley Heath, which was available for people to collect water from although it is said the tank on the Heath was never popular because of the brackish taste of the water. Private piped supplies served Headley Park and Headley Court from ponds and filtration beds in Nower Wood. Electricity first came to the village in 1902 and slowly spread through the village but some cottages were not connected until the 1950’s. Headley Park had its own generating station to supply its needs.

Headley, like most villages was well supplied with shops and pubs – there were two pubs, The Clermont on Tot Hill and the Cock in Church Lane, several small alehouses also existed at cottages throughout the village. There was a general shop and post office in Church Approach, a bakers, butchers and a boot maker in Tot Hill. The bakers later moved to the new shop and Village Hall in Church Lane when it was built in 1903. A laundry serving the large houses was situated in Slough Lane. Milk was delivered by local farms particularly Addlestead Farm. A draper travelled the area regularly from Kingswood, and after the butcher closed meat was delivered from Walton on the Hill. A doctor held a weekly surgery in the Village Hall and the district nurse provided medical assistance from Walton. At least two builders were active building new properties and maintaining existing buildings. A smith was kept busy at the forge shoeing horses and repairing agricultural machinery.

From 1916-1941, the Rector was Theodore Evelyn Reece Phillips. As well as being rector of Headley he was an internationally famous astronomer and was President and secretary of The British Astronomical Society and travelled widely to view astronomical events and serve on committees. At the rear of the Rectory he had two observatories with both his own telescope and a very good instrument on loan from the society.  Most eminent astronomers of the day visited Headley to observe with him or to attend his annual astronomical garden parties.

During the Second World War Headley received in the region of 100 bomb hits including a near miss on the rectory with a flying bomb but no one was seriously injured. Headley Court became the headquarters of Canadian forces in Europe and Headley Heath was used as a training ground for engineers building airstrips and trench systems then demolishing them again. There was an active Home Guard unit and the Observer Corps had an observation post near the Cricket Field. Headley was lucky and only lost 3 men during the war. 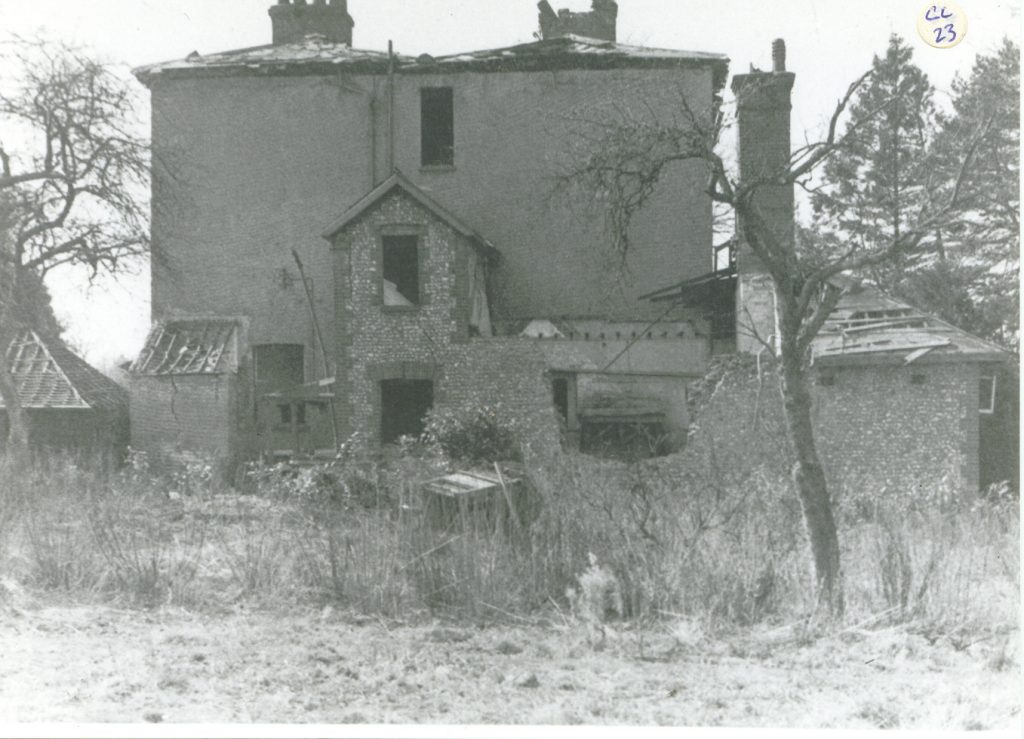 Headley has several very long standing clubs and organisations. The Parish Council was one of the first to be formed in 1894 and celebrated its Centenary in 1994. The Cricket Club was first founded in1860 but did not survive – it was restarted in 1893 and still thrives today. The Women’s Institute was formed in 1918 and still meets on the first Tuesday of each month. Headley is one of the villages to benefit from The Henry Smith Charity and the village trustees distribute money to assist the old people of the village and support various activities for the good of the village as a whole.

Headley might well have been a different place today if a scheme promoted by Arthur Moore of Fetcham Park in 1720 to build a large terrace of Georgian houses similar to the terraces seen in London and Bath had gone ahead. The development was to be on the common fields of the manor, two houses were recorded as having been completed by 1736 but no trace of the development can be found today.

There is a book titled History of Headley published by The Leatherhead Local History Society which is available from the Village Shop and local booksellers.

This section of Headley history was kindly provided by Peter Denyer – a resident who has lived in the village all his life.  Peter also holds a large collection of photographs of Headley in the 20th century and many written records.  If you would like any information, please contact the Parish Clerk in the first instance.